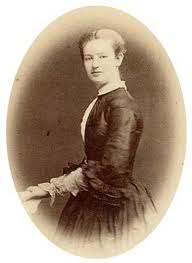 In doing my research on the life of Major General John Fulton Reynolds for my Gettysburg text I began to read about his relationship with Kate Hewitt. It adds a dimension to this man’s life that we miss if we only look at his actions on the battlefield or his military career. I added this to the end of the chapter on Reynolds and I hope that you are touched by it. As I read the story of this couple I found myself in tears on a number of occasions, and as I wrote this part of the chapter I kept crying.

Tragedy is implicit in war, and the tragedy of people who lose those that they love cannot be casually tossed aside in our quest to examine yet another battle.

Those who die in war often leave behind those that they love, and sometimes those stories are shrouded in mystery themselves. When Reynolds’s body was removed from the battlefield he was found to be wearing a Catholic religious medal around his neck on a chain on which also hung a “gold ring joined in the shape of clasped hands. On the inner band were inscribed the words “Dear Kate.” [1] Additionally his West Point ring was missing. His family was stunned as Reynolds’s had never breathed a word to them about any woman in his life.

It turned out that Kate, was a young woman named Katherine Mary Hewitt who Reynolds had met when travelling by steamship from San Francisco to Philadelphia on his way to West Point in 1860. The couple kept the relationship secret, possibly because Reynolds and his family were Protestant and she was a recent convert to the Catholic faith and at the time there was still a tremendous prejudice against Catholics in the country. Despite the fact that the anti-immigrant and virulently anti-Catholic Know Nothing Party had disappeared many of their anti-immigrant and anti-Catholic prejudices remained strong.

On September 15th 1861 Reynolds visited his family in Philadelphia at which time he visited Kate and proposed. They exchanged rings, she getting his West Point Ring, which she used to imprint the wax seals on the letters she would send to him. In the winter of 1863 he again visited his family in Philadelphia and made a clandestine visit to Kate. At that time “they set July 8th as the date to announce the engagement to his family.” [2]

Reynolds’s family wondered who this mystery woman was and his sister Jennie wrote a letter to his brother Will “we all thought a lady was the donor and must be prized and wished we could only know who and where she was.” [3] With Reynolds’s body lying in repose at his sister Catherine Landis’s home on July 3rd prior to it being taken by train to his home town of Lancaster the family discovered the identity of the mystery woman. On that morning there was a knock at the door and a young woman presented herself, asking if she could view Reynolds’s body. Reynold’s sisters and brother in law immediately fell in love with her. Their only regret was not having known her prior to Reynolds’s death. She announced that “in the event of his death, she would enter a Catholic convent.” [4] As Kate viewed the body she wept, sometimes uncontrollably. Eventually she placed his West Point Ring in his coffin and took back her religious medal. She left that day and on July 12th entered the convent of the Sisters of Charity at Emmitsburg where she took the name Sister Hildegarde. His sister Ellie wrote:

“Poor girl she has been a heroic mourner and most worthy of our dear one. I cannot tell you all she said of him but she was in his heart and from her I learned much of him, of his feelings and inner life that I never knew before….She made no parade of her religion, nor in any way that was the least disagreeable….” [5]

The Reynolds’s family treated Kate as family and they remained in touch with her as they did his faithful orderly Sergeant Veil who had been with him when he fell at Gettysburg. However, in 1868 in poor health Kate left the Sisters of Charity while serving as a teacher in Albany New York without having taken her final vows. Evidently the “sisters at Emmitsburg, according to Kate’s biographer and author of “Is She Kate?” Marian Latimer, found Kate “unsuitable for community life.” [6] After leaving the order she “remained in Albany working as a teacher for several years and in fact, living for some time with another sister who left the order.” [7]

About that time the correspondence between her and Reynolds’s family stopped. All subsequent attempts of the Reynolds family to regain contact with their brother’s true love failed. Still mourning her one true love, a man who was neither her husband nor a blood relative, Kate gave up her Catholic faith and alone in the world returned to her hometown of Stillwater New York where she continued to teach. She never remarried and died in Stillwater of pneumonia there in 1895. She was buried there and her stone is an octagon and symbolic of rebirth and resurrection. The word Mizpah is carved on the stone and is a Hebrew benediction meaning, ‘May God watch over you until we are together again.’ [8]