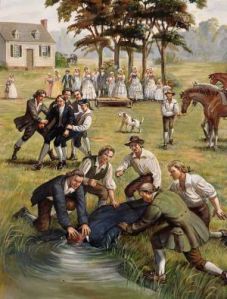 Robert Heinlein wrote that, “Almost any sect, cult, or religion will legislate its creed into law if it acquires the political power to do so.” His words are quite relevant and in a way consistent with the desires of the founders of the United States.

Since I am still getting readjusted to life back in the states after my very nice trip in Germany where I was mostly off the grid I will just share a few thoughts. They are not really original to me, but they are born of reflection on the palpable political anger of the politicians, pundits and preachers of the political-religious movement that I refer to as the “Christian Right.”

Gary North, a prominent ideologue of the movement who has advised many of the current Christian Right leaders of the Republican Party, and whose ideas are widely promulgated by the politicians, pundits and preachers of the Christian Right was quite clear in what this movement desires. “The long-term goal of Christians in politics should be to gain exclusive control over the franchise. Those who refuse to submit publicly to the eternal sanctions of God by submitting to His Church’s public marks of the covenant–baptism and holy communion–must be denied citizenship, just as they were in ancient Israel.” Thus, every time you hear the words “religious freedom” or “religious liberty” being uttered by them, please understand that they are talking about their religious liberty only, and that that liberty has at its heart the desire to establish their political-religious dogma as law of the land. Thomas Paine, the author of the amazing little book “Common Sense” which was so much a part of the thought of our founders noted, “Persecution is not an original feature in any religion; but it is always the strongly marked feature of all religions established by law.”

Robert Ingersoll, one of this first prominent skeptics in this country and acknowledged atheists wrote something quite profound in understanding the nature of what our founders intended and why there were protections both for and from religion in the Constitution:

“They knew that to put God in the constitution was to put man out. They knew that the recognition of a Deity would be seized upon by fanatics and zealots as a pretext for destroying the liberty of thought. They knew the terrible history of the church too well to place in her keeping or in the keeping of her God the sacred rights of man. They intended that all should have the right to worship or not to worship that our laws should make no distinction on account of creed. They intended to found and frame a government for man and for man alone. They wished to preserve the individuality of all to prevent the few from governing the many and the many from persecuting and destroying the few.”

Ingersoll correctly reflected the thoughts of Jefferson, Madison, Adams and even George Washington as well as early Virginia Baptist John Leland, and other pioneers of religious liberty like Roger Williams, the founder of the colony of Rhode Island.

In light of this fact, maybe it is time for Christians to get off their high-horse expecting that they should hold the rights to the political franchise and remember the words of James Madison who said, “Every new & successful example therefore of a perfect separation between ecclesiastical and civil matters, is of importance. And I have no doubt that every new example, will succeed, as every past one has done, in shewing that religion & Govt. will both exist in greater purity, the less they are mixed together.”

Have a great night,

One response to “Religion & State: The Less Mixed the Better”