“They Remain Fresh and Open in the Heart” Moral Wounds, often Hidden but Never Healed

Stephen King wrote: “Nightmares exist outside of logic, and there’s little fun to be had in explanations; they’re antithetical to the poetry of fear.”

I prefer physical pain and physical injury to moral, emotional, and spiritual injury. I agree with Alexander Dumas who wrote in the Count of Monte Cristo: “Moral wounds have this peculiarity – they may be hidden, but they never close; always painful, always ready to bleed when touched, they remain fresh and open in the heart.”

That is how I feel over ten years after returning from Iraq in 2008. No matter how well I am doing there are times when things going on in the present fill me with terror and evoke the ghosts of my past. As much as I want to put my war and other wars in the past I see American political leaders, propagandists, and religious leaders doing all they can to bring about new wars abroad and divide us at home.

I find this deeply unsettling and it causes great anxiety, especially when I try to sleep. On Saturday night I had terrible nightmares of war with superiors trying to force me to commit war crimes. Four times Judy tried to wake me as I screamed and fought and I couldn’t pull myself out of the dreams. Thankfully I did not end up throwing myself out of bed and causing injury as I have done before. Likewise the Papillons, including our youngest boy, Pierre, now know to move to a different part of the bed when I am so unsettled.

Guy Sajer wrote in his book The Forgotten Soldier, “Only happy people have nightmares, from overeating. For those who live a nightmare reality, sleep is a black hole, lost in time, like death.” United States Army General Gouverneur Warren, a hero of many Civil War battles including Gettysburg wrote to his wife after the war “I wish I did not dream so much. They make me sometimes to dread to go to sleep. Scenes from the war, are so constantly recalled, with bitter feelings I wish never to experience again. Lies, vanity, treachery, and carnage.”

In my dreams I remember everything about the war like it was yesterday. The images are vivid: wounded Marines, a wounded Iraqi boy with his father, a rocket flying just a few feet above my head, taking small arms fire in Ramadi on the ground and aboard an Army helicopter which returned fire as we took off from Ramadi, destroyed cities and villages, destitute and terrified people, and refugees. 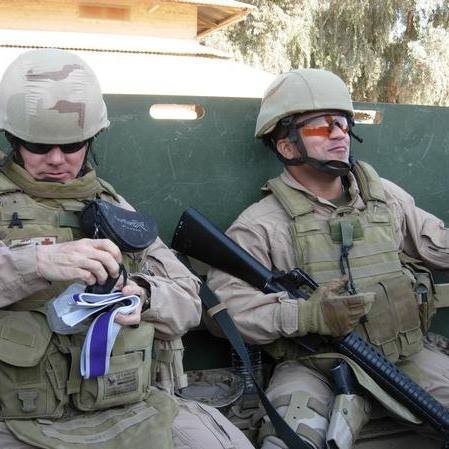 But those dreams and nightmares blend reality with unreality, real places with imaginary places, places that I’ve been to but are not the same as they are in the real world and they frequently show up. You think that I would be used to them; but no matter how often I have them I never get used to them, and I can’t really explain them, I only try to survive them.

Of course now I am dealing with constant physical pain with my knees, hip, and ankles. This is something relatively new for me, but even so, I can deal with physical pain better than emotional or spiritual pain, and the nightmares and night terrors.

One of my favorite actors, James Spader, plays a character named Raymond Reddington on the television show The Blacklist. During one episode he told another character something quite profound, something that if we actually embrace it can be somewhat comforting. “There is nothing that can take the pain away. But eventually, you will find a way to live with it. There will be nightmares. And every day when you wake up, it will be the first thing you think about. Until one day, it’s the second.”

Anyway, I think that Reddington’s words are true. toward the end of next month I will be getting another sleep study, this one to try to figure out how to mitigate the physical violence in my dreams, even as I deal with constant physical pain. Who knows, maybe the physical pain will dull the emotional or spiritual pain that lies deep in my psyche and inhabits my dreams and nightmares?

But I guess that is just a rhetorical question.

3 responses to ““They Remain Fresh and Open in the Heart” Moral Wounds, often Hidden but Never Healed”