It was the day after General Robert E Lee had requested to Lieutenant General Ulysses S. Grant that his Army of Northern Virginia be allowed to surrender. The once mighty army now a haggard but proud force of about 11,000 soldiers faced hopeless odds against a vastly superior enemy. Since Gettysburg Lee’s army had been on the defensive, Lee’s ill fated offensive into Pennsylvania being one of the two climactic blows that sealed the doom of the Confederacy, the other Grant’s victory at Vicksburg which fell a day after Pickett’s Charge.

On the 9th and 10th of April three men, Ulysses S Grant, Robert E Lee and Joshua Lawrence Chamberlain taught succeeding generations the value of mutual respect and reconciliation after a bitter and bloody war.

With each battle following Gettysburg the Army of Northern Virginia became weaker and finally after the nine month long siege of Petersburg ended with a Union victory there was little else to do. When his artillery chief Porter Alexander recommended that the Army be released, “take to the woods and report to their state governors” Lee replied:

“Already [the country] is demoralized by the four years of war. If I took your advice, the men would be without rations and under no control of their officers. They would be compelled to rob and steal in order to live…. We would bring on a state of affairs it would take the country years to recover from… You young fellows might go bushwhacking, but the only dignified course for me would be to go to General Grant and surrender myself and take the consequences of my acts.”

Abraham Lincoln had already set the tone for the surrender in his Second Inaugural Address given just over a month before the surrender of Lee’s army. Lincoln closed that speech with these words of reconciliation:

“With malice toward none, with charity for all, with firmness in the right as God gives us to see the right, let us strive on to finish the work we are in, to bind up the nation’s wounds, to care for him who shall have borne the battle and for his widow and his orphan, to do all which may achieve and cherish a just and lasting peace among ourselves and with all nations.”

“In accordance with the substance of my letter to you of the 8th inst., I propose to receive the surrender of the Army of N. Va. on the following terms, to wit: Rolls of all the officers and men to be made in duplicate. One copy to be given to an officer designated by me, the other to be retained by such officer or officers as you may designate. The officers to give their individual paroles not to take up arms against the Government of the United States until properly exchanged, and each company or regimental commander sign a like parole for the men of their commands. The arms, artillery and public property to be parked and stacked, and turned over to the officer appointed by me to receive them. This will not embrace the side-arms of the officers, nor their private horses or baggage. This done, each officer and man will be allowed to return to their homes, not to be disturbed by United States authority so long as they observe their paroles and the laws in force where they may reside.”

When Lee left the building Federal troops began cheering but Grant ordered them to stop. He later noted: “The Confederates were now our countrymen, and we did not want to exult over their downfall.”

The surrender itself was accomplished with a recognition that soldiers who have given the full measure of devotion can know when confronting a defeated enemy. Major General Joshua Lawrence Chamberlain, the heroic victor of Little Round Top was directed by Grant to receive the surrender of the defeated Confederates. As they passed, moved with emotion he ordered his soldiers to salute the defeated enemy for whose cause he had no sympathy. 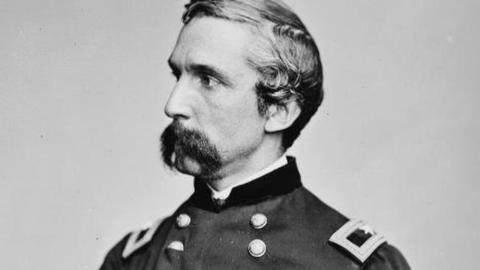 Chamberlain was not just a soldier, but before the war had been Professor of Natural and Revealed Religions at Bowdoin College, and a student of theology before the war. He could not help to see the significance of the occasion. He understood that he would be criticized by some for offering the salute, however unlike some, the staunch abolitionist and Unionist who had nearly died on more than one occasion fighting the defeated Confederate Army understood that no true peace could transpire unless the enemies became reconciled to one another.

He noted that his chief reason for doing so:

“The momentous meaning of this occasion impressed me deeply. I resolved to mark it by some token of recognition, which could be no other than a salute of arms. Well aware of the responsibility assumed, and of the criticisms that would follow, as the sequel proved, nothing of that kind could move me in the least. The act could be defended, if needful, by the suggestion that such a salute was not to the cause for which the flag of the Confederacy stood, but to its going down before the flag of the Union. My main reason, however, was one for which I sought no authority nor asked forgiveness. Before us in proud humiliation stood the embodiment of manhood: men whom neither toils and sufferings, nor the fact of death, nor disaster, nor hopelessness could bend from their resolve; standing before us now, thin, worn, and famished, but erect, and with eyes looking level into ours, waking memories that bound us together as no other bond;—was not such manhood to be welcomed back into a Union so tested and assured? Instructions had been given; and when the head of each division column comes opposite our group, our bugle sounds the signal and instantly our whole line from right to left, regiment by regiment in succession, gives the soldier’s salutation, from the “order arms” to the old “carry”—the marching salute. Gordon at the head of the column, riding with heavy spirit and downcast face, catches the sound of shifting arms, looks up, and, taking the meaning, wheels superbly, making with himself and his horse one uplifted figure, with profound salutation as he drops the point of his sword to the boot toe; then facing to his own command, gives word for his successive brigades to pass us with the same position of the manual,—honor answering honor. On our part not a sound of trumpet more, nor roll of drum; not a cheer, nor word nor whisper of vain-glorying, nor motion of man standing again at the order, but an awed stillness rather, and breath-holding, as if it were the passing of the dead!”

The next day Robert E Lee address his soldiers for the last time. Lee’s final order to his loyal troops was published the day after the surrender. It was a gracious letter of thanks to men that had served their beloved commander well in the course of the three years since he assumed command of them outside Richmond in 1862.

After four years of arduous service marked by unsurpassed courage and fortitude, the Army of Northern Virginia has been compelled to yield to overwhelming numbers and resources.

need not tell the survivors of so many hard fought battles, who have remained steadfast to the last, that I have consented to the result from no distrust of them.
But feeling that valour and devotion could accomplish nothing that could compensate for the loss that must have attended the continuance of the contest, I have determined to avoid the useless sacrifice of those whose past services have endeared them to their countrymen.

By the terms of the agreement, officers and men can return to their homes and remain until exchanged. You will take with you the satisfaction that proceeds from the consciousness of duty faithfully performed, and I earnestly pray that a merciful God will extend to you his blessing and protection.

With an unceasing admiration of your constancy and devotion to your Country, and a grateful remembrance of your kind and generous conideration for myself, I bid you an affectionate farewell. — R. E. Lee, General 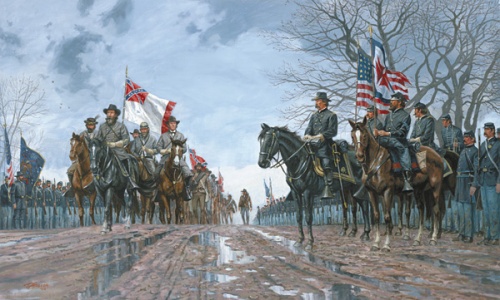 The surrender was the beginning of the end. Other Confederate forces continued to resist for several weeks, but with the surrender of the Army of Northern Virginia led by the man that nearly all Southerners saw as the embodiment of their nation the war was effectively over.

Lee had fought hard and after the war was still under the charge of treason, but he understood the significance of defeat and the necessity of moving forward as one nation. In August 1865 Lee wrote to the trustees of Washington College of which he was now President:

“I think it is the duty of every citizen, in the present condition of the Country, to do all in his power to aid the restoration of peace and harmony… It is particularly incumbent upon those charged with the instruction of the young to set them an example of submission to authority.”

It is a lesson that all of us in our terribly divided land need to learn regardless of or political affiliation or ideology. Lee learned that Grant’s Aide-de-Camp was a Seneca and said after the surrender “It is good to have one real American here.” The officer replied, “Sir, we are all Americans.”

It is time again that we learn that lesson.