String Bags vs. The German Leviathan: The Crippling Of the Battleship Bismarck

The second, which I deal with today, was the pursuit and search for Bismarck by the British Home Fleet and the desperate attempt of the British to find a way, any way, to slow Bismarck down and bring her to battle, before she could return to the safety of Nazi occupied France.  The final chance to stop the mighty German Leviathan came as night fell on May 26th.

I hope you appreciate the heroism of the men who flew the hopelessly obsolete aircraft who dealt the blow which crippled Bismarck. This is a re-write of past articles and I will post the final article about the sinking of the Bismarck tomorrow.

There is one other thing to mention. I cannot imagine what it would have been to be a crewman on the Bismarck, knowing that nightfall would bring them safely unter the protection of the Luftwaffe, and then discover that there was no escape from death and destruction. 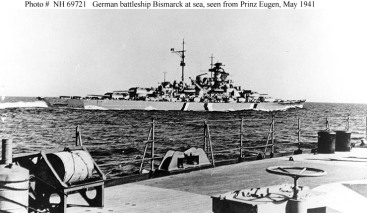 On May 24th 1941 the German Battleship Bismarck had sunk the celebrated Battlecruiser HMS Hood in the Denmark Strait and had seriously damaged the new Battleship HMS Prince of Wales. The news of the disaster stunned the Royal Navy. Fighting a war on multiple fronts and now standing alone against Hitler’s Germany the British deployed every warship available to find and sink Bismarck.

On the evening of the 24th of May Bismarck was being shadowed by the heavy cruisers HMS Norfolk and HMS Suffolk. To the east the ships of the Home Fleet, Britain’s last line of defense under the command Admiral John Tovey was making the fastest speed to intercept the Bismarck.  Far to the southeast, Vice Admiral James Sommerville’s  “Force H” comprised of the carrier HMS Ark Royal, the fast but elderly battlecruiser HMS Renown, and the light cruiser HMS Sheffield were ordered to leave the vital convoy which there were escorting and proceed to the northwest to join the hunt for the German battleship.

HMS Ark Royal with Swordfish in 1939

With Bismarck loose the North Atlantic Convoys on which Britain depended for her survival were vulnerable. The previous year the commander of the Bismarck task force Admiral Günther Lütjens with the Battlecruisers Scharnhorst and Gneisenau had wreaked havoc on the convoys. Now of Britain was on edge with the news of Bismarck’s break out into the Atlantic. Churchill was furious with the Navy when the Mighty Hood, the largest and most powerful ship in the Royal Navy destroyed with the loss of all but three crew members. Now every effort was directed to find and sink the Bismarck.

Bismarck photographed from a Swordfish from 825 Squadron

Accompanying the Home Fleet was the brand new Aircraft Carrier HMS Victorious with 825 Naval Air Squadron embarked under the command of LCDR Eugene Esmond. The squadron, like many in the Fleet Air Arm was equipped with Fairy Swordfish Torpedo Bombers. The squadron had seen action aboard other carriers in the North Atlantic, the Norway Campaign and in the Mediterranean before being assigned to the Victorious. On the night of 24 May 1941, in foul North Atlantic weather the Victorious launched nine Swordfish from a range of 120 miles in a desperate attempt to slow the Bismarck down. Esmond’s squadron scored one hit amidships on the Bismarck which did no serious damage.

About 6 hours after the attack by Victorious’s Swordfish, Bismarck shook her pursuers and disappeared into the mists of the North Atlantic, while her consort, the Heavy Cruiser Prinz Eugen escaped to the northwest in order to conduct independent raiding operations. Not knowing the location or course of the Bismarck the Royal Navy frantically searched for the German Leviathan. Most of the ships nearest to Bismarck’s last reported position were low on fuel and others seemed too far away to be of any importance in the search.

However the British were able to intercept and decode some German communications which indicated that Lütjens had orders to steam to Brest, in German occupied France for repairs.

Though the British believed that the Bismarck could be headed toward Brest they could not be sure, as each hour passed the chances of finding and bringing Bismarck to battle diminished. For nearly 36 hours the British searched in vain for the Bismarck, and for much of the 25th Tovey’s squadron was searching in the wrong direction. Then at 1030 on the 26th of May their luck changed.

Likewise the crew of the Bismarck believed with every hour that they would soon be under the protection of Herman Goering’s Luftwaffe and safely in France, but the good fortune of the British was the worst thing that could happen to the 2200 men aboard Bismarck.

On that morning a Royal Air Force Coastal Command PBY Catalina co-piloted by US Navy Ensign Leonard Smith found the Bismarck. Once Smith transmitted Bismarck’s location every available ship converged on her location but unless something could be done to slow the German down the chances bringing her to battle diminished by the hour.

The only heavy forces close enough to successfully engage Bismarck, Tovey’s battleships HMS King George V and HMS Rodney were over 100 miles behind Bismarck, too far away unless Bismarck changed course or could be slowed down. Somerville’s Force H to the south did not have the combat power to survive a surface engagement with the Bismarck should they encounter the Bismarck without the support of other heavy fleet units. Even so Sommerville was willing to risk the Renown in a suicidal action to bring Bismarck to battle if it would allow Tovey to catch her before she could escape. Desperation was the order of the day for both sides.

The situation was desperate, if Bismarck could not be slowed down she would be in range of heavy Luftwaffe Air support as well as support from U-Boats and destroyers based in France. Unless something akin to a miracle occurred Bismarck would join the Scharnhorst and Gneisenau in Brest and with the addition of Bismarck’s sister-ship Tirpitz form a surface squadron strong enough to devastate British shipping in the Atlantic.

Ark Royal’s aircraft were the last hope of slowing down Bismarck before she could effect her escape and emerge from the Atlantic after having dealt the Royal Navy a devastating blow.

The strike aircraft available on Ark Royal were the most unlikely aircraft imaginable to successfully carry out such a mission. Ark Royal’s 820 Squadron, like Victorious’ 824 Squadron was equipped with Fairy Swordfish Mk 1 Torpedo Bombers. These were biplanes with their crew compartment exposed to the weather.

Introduced to the Navy in 1936 the aircraft was an antique compared with most aircraft of its day. Likewise the Mark XII 18” torpedo carried by the aircraft was smaller or slower and equipped with a less powerful warhead than comparable torpedoes used by other navies. Despite their limitations the venerable Swordfish had performed admirably during the early part of the war sinking or damaging three Italian battleships at Taranto in November 1940. Their success against the Italians at Taranto gave inspiration to the Japanese for their attack against the U.S. Pacific Fleet at Pearl Harbor the following year. But now, in the face of foul weather and a powerful opponent the Swordfish were all the Royal Navy had left to stop Bismarck before she could make her escape.

Bismarck steering erratically after the torpedo hit to her stern

With that in mind  Sommerville in sent his light cruiser, the  HMS Sheffield ahead to shadow Bismarck while Ark Royal closed in to launch her Swordfish against Bismarck. The first wave of aircraft strike, unaware Sheffield was near Bismarck mistakenly attacked the British cruiser. Thankfully, the new design magnetic detonators failed to detonate the torpedoes saving Sheffield from destruction. With little daylight left the aircraft returned to Ark Royal where they rearmed with torpedoes equipped with contact fuzes and refueled by flight deck crew laboring in rain and 50 knot winds blowing across the carrier’s flight deck. Just before 8 p.m. 15 Swordfish of 820 Squadron took off for what they knew was the very last chance to attack Bismarck before night fell. If they failed Bismarck would most certainly escape.

As darkness began to fall the 15 Swordfish from 820 Squadron descended through the clouds to attack the German ship. Just fifteen obsolete aircraft and thirty men attacking the most powerful warship afloat. They dispersed and attacked from all points of the compass. Bismarck twisted and turned and fired all of her guns at the attacking aircraft. The Germans fired with every weapon available, even the 15″ guns of her main battery, which she fired her into the ocean ahead of the Swordfish. It appeared for a moment that the Bismarck had successfully avoided serious damage. All but two torpedoes missed.  One torpedo struck the German midships and barely dented her massive armor. However a second torpedo, launched by a Swordfish piloted by Lieutenant John Moffat hit Bismarck in her weakly armored stern. The target angle from the aircraft to Bismarck was poor and those aboard the battleship who saw the torpedo approach believed that it was certain to miss, but it hit.

The hit jammed Bismarck’s port rudder at a 12 degree angle, and destroyed her steering gear. Repair crews and divers were dispatched but the weather was such that German damage control teams could not repair her steering gear. Bismarck now steamed in circles, unable to maneuver. This enabled Tovey with King George V, Rodney, the heavy cruisers Norfolk and Dorchester, as well as a number of destroyers to catch up with the elusive German battleship.

The attacks of the antiquated Swordfish on the Bismarck achieved results that no one in the Royal Navy expected. When reports indicated that Bismarck had reversed course following the torpedo attack Tovey could not believe them. It was only when lookouts aboard Sheffield confirmed the reports from the Swordfish that Tovey realized that Bismarck must have been damaged and was unable to maneuver.

It was a dramatic and unexpected turn of events. The German crew sank into gloom as the night went on and they dealt with torpedo attacks from the British Destroyers as Tovey’s battleships moved in for the kill.

One response to “String Bags vs. The German Leviathan: The Crippling Of the Battleship Bismarck”