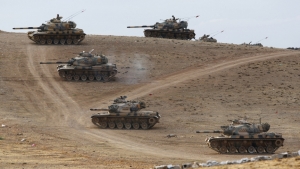 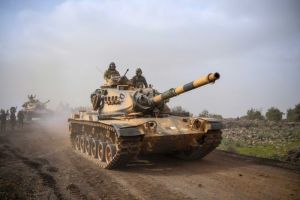 I was stunned to find out Sunday that President Trump announced that U.S. advisors and other troops backing the Kurds in Syria were going to be pulled out in order to aid a Turkish offensive against them. It was an announcement evoked strong bi-partisan condemnations in Congress, but it appears that the President will not make down.

U.S. Troops Pulling Out to Make Way for Turkish Offensive

During the war against ISIS, or the Islamic State, it was the Kurds who were our most effective and and loyal ally. It was mostly due to their military prowess and sacrifice, that we achieved a large measure of success in defeating ISIS on the battlefields of Syria and Iraq. For the most part they did the dying for us and still are doing so. The Kurds were also responsible for clearing ISIS from much of northern Iraq.

While crippled, ISIS is not yet defeated, its key leaders remain alive and the Kurds are necessary to ensure their final defeat. Our military commitment inside Syria has been minimal and achieved greater success than our substantially greater efforts in Iraq or Afghanistan. The Joint operations with the Kurds in Syrian and northwestern Iraq have arguably been our most successful operations in the Middle East since we invaded Afghanistan eighteen years ago.

Over a hundred years ago T. E. Lawrence provides the template for success that we have used with the Kurds. While we have given them important help, it has been their war to win or lose. Lawrence wrote his superiors:

“Do not try to do too much with your own hands. Better the Arabs do it tolerably than that you do it perfectly. It is their war, and you are to help them, not to win it for them. Actually, also, under the very odd conditions of Arabia, your practical work will not be as good as, perhaps, you think it is.”

We could keep doing that if we didn’t have a President who is willing to cut and run, and abandon the Kurds to the Turks under their leader Recep Erdogan. Erdogan is not just a Turk Nationalist, he is an Islamist. He and for that matter many generations of Turks have desired to crush the Kurds, a people left without a state when the borders of the former Ottoman Empire were redrawn after World War One. They live in Iraq, Syrian, and eastern Turkey. They are a distinct ethnic group who only want freedom and to be left in peace. 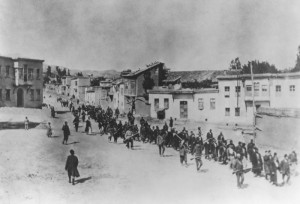 Now all the success against ISIS is in doubt and the Turks will have a free hand to exterminate the Kurds. History shows that they are quite good at genocide. The Armenian genocide was bloody and brutal. Between 700,000 and 1.5 million  Armenians were killed, others used as Slave Labor, placed in Concentration Camps, subjected to poison gas, infected with Typhus, in some cases pushed out to sea in overloaded unseaworthy small boats in condition that left them to drown.  Still others driven into the Syrian desert. The genocide began in 1915 and continued after the war, however, over the preceding decades they had been subjected to smaller yet brutal pogroms. At the same time the Turks conducted similar operations against ethnic Greeks and Abyssinians.

Now, the American President is presenting Turkey its long delayed chance to eliminate the Kurds. Sadly, with his emigration policies, those men and women who have fought alongside of us for the better part of a decade will not be afforded asylum and left to the bloody designs of the Turks, and the revenge of ISIS.

In response to his critics the President tweeted something so incredibly inane that I cannot begin to fathom it: 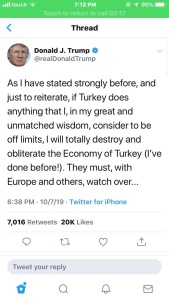 If he really believes this he should be removed from office under the 25th Amendment. Anyone who says that they have Great and Unmatched Wisdom” as they threaten to destroy the economy of another country with good options for support, such as Russia and China, our economic and military competitors is a loon.

At this point I can only imagine the worst, unless Congress votes to overturn his unilateral action. The blood of the Kurds will be on our hands, and we will be saddled with the reputation of being an unreliable ally that cannot be trusted. That is already happening across the globe as long time allies explore non-U.S. based options for their security. In such a case no amount of military might can save us. We will be alone, but then that is what Trump wants. He thinks an omnipotent military, a tightly controlled police state, and economic isolation through tariff after tariff, including against allies will Make America Great?

Although all of this is connected I digress. We are watching the President melt down before our eyes. His actions are erratic and setting us, all of us, his supporters and opponents alike up for disaster, economic, and possibly military. In his desperation to save his Presidency with impeachment looming, it is highly likely that he will become more unstable and devolve further.

But right now I expect the worst for the Kurds.