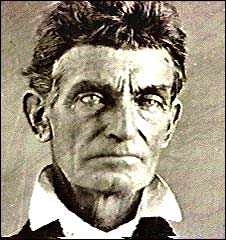 October 16th is the anniversary of John Brown’s attempted seizure of the Federal Armory at Harpers Ferry. He was executed after trial on December 2nd 1859. Brown was  a man who had a righteous cause, but surrendered the moral high ground because of his fanaticism. Justice Robert Jackson wrote:“[I]n our country are evangelists and zealots of many different political, economic and religious persuasions whose fanatical conviction is that all thought is divinely classified into two kinds — that which is their own and that which is false and dangerous.” John Brown was a fanatic who in his desire to achieve his goal was not above committing murder as he did in Kansas, and insurrection as he did at Harper’s Ferry. There are many people in this country who harbor similar beliefs. John Brown serves as a warning to all of us. Violent means in service of a honorable or righteous cause often make things far worse.

This article is part of my draft book Mine Eyes have Seen the Glory: Race, Religion, Ideology and Politics in the Civil War Era.

In the North there too existed an element of religious fanaticism. While “the restraining hand of churches, political parties and familial concerns bounded other antislavery warriors,” [1] and while most abolitionists tried to remain in the mainstream and work through legislation and moral persuasion to halt the expansion of slavery with the ultimate goal of emancipation; there were fanatical abolitionists that were willing to attempt to ignite the spark which would cause the powder keg of raw hatred and emotion to explode.

Most prominent among these men was John Brown. Brown was a “Connecticut-born abolitionist…a man with the selfless benevolence of the evangelicals wrought into a fiery determination to crush slavery.” [2] His father was an early abolitionist who helped later found Oberlin College. In his early years Brown “formulated a certitude about divine intervention against sinners, starring himself as God’s warrior against slaveholders.” [3] As early as 1834 John Brown was “an ardent sympathizer the Negroes,” desiring to raise a black child in his own home and to “offering guidance to a colony of Negroes on the farm of the wealthy abolitionist Gerrit Smith at North Elba New York.” [4]Brown regarded moderate free Staters with distain and though he was a fanatical Christian he never joined any church, and “obeyed only his conception of God’s unbounded command.” [5]

Brown “ridiculed Republican’s mainstream tactics. He disparaged even Yankee extremists for deploying too non-violent a strategy.” [6] After a series of failed business ventures the militant Brown went to Kansas and set about to change the equation through the use of terror. After the sack of Lawrence, Brown and a company of his marauders set upon and slaughtered the family of a pro-slavery settler at Pottawatomie Creek. [7] Brown and his son’s entered the house of one family, “dragged three men outside, shot the father through the head, and hacked and mutilated his two sons with broadswords.”[8] Two years later Brown went to Missouri where he “murdered a slaveholder, seized eleven slaves, and led the new freedmen 1100 miles to Canadian sanctuary.” [9]

The example of John Brown provides us with a good example to understand religious extremism, especially when it becomes violent. The counterinsurgency field manual notes in words that are certainly as applicable to Brown as they are to current religiously motivated terrorists, that “Religious extremist insurgents….frequently hold an all-encompassing worldview; they are ideologically rigid and uncompromising….  believing themselves to be ideologically pure, violent religious extremists brand those they consider insufficiently orthodox as enemies.”[10]

Brown was certainly “a religious zealot…but was nevertheless every much the product of his time and place….” [11] Brown was a veteran of the violent battles in Kansas where he had earned the reputation as “the apostle of the sword of Gideon” as he and his men battled pro-slavery settlers. Brown was possessed by a zealous belief that God had appointed him as God’s warrior against slaveholders. He despised the peaceful abolitionists and demanded action. “Brave, unshaken by doubt, willing to shed blood unflinchingly and to die for his cause if necessary, Brown was the perfect man to light the tinder of civil war in America, which was what he intended to do.” [12]

Brown attempted to gain financing from wealthy abolitionists for a new expedition to seize the Federal arsenal at Harper’s Ferry Virginia, and most would have nothing to do with his scheme. When they “touted their pacific antislavery societies, Brown responded that “your methods are perfectly futile; you would not release five slaves in a century; peaceful emancipation is impossible.” [13] After hearing William Lloyd Garrison and other abolitionist leaders plead for peaceful abolition he remarked: “We’ve reached a point,” I said, “where nothing but war can get rid of slavery in this guilty nation. It’s better that a whole generation of men, women, and children should pass away by a violent death than that slavery should continue to exist.” I meant that literally, every word of it.” [14]

Following that meeting, as well as a meeting with Frederick Douglass who rejected Brown’s planned violent action, Brown went about collecting recruits for his cause and set out to seize 10,000 muskets at the Federal armory in Harper’s Ferry, Virginia in order to ignite a slave revolt. Brown and twenty-one followers, sixteen whites and five blacks moved on the arsenal. As they went, Brown:

“believed that we would probably fail at the Ferry, would probably die. But I believed that all we had to do was make the attempt, and Jehovah would do the rest: the Heavens would turn black, the thunder would rend the sky, and a mighty storm would uproot this guilty land, washing its sins away with blood. With God’s help, I, John Brown, would effect a mighty conquest even though it was like the last victory of Samson.” [15]

After initial success in capturing the armory, Brown’s plan was frustrated and Brown captured by a force of U.S. Marines, led by Colonel Robert E. Lee and Lieutenant J.E.B. Stuart. Brown was tried and hanged, but his raid “effectively severed the country into two opposing parts, making it clear to moderates there who were searching for compromise, that northerner’s tolerance for slavery was wearing thin.” [16]

It now did not matter that Brown was captured, tried, convicted and executed for his raid on Harper’s Ferry. Brown to be sure was “a half-pathetic, half-mad failure, his raid a crazy, senseless exploit to which only his quiet eloquence during trial and execution lent dignity” [17] but his act was the watershed from which the two sides would not be able to recover; the population on both sides having gone too far down the road to disunion to turn back.

Brown had tremendous support among the New England elites, the “names of Howe, Parker, Emerson and Thoreau among his supporters.” [18] To abolitionists he had become a martyr “but to Frederick Douglass and the negroes of Chatham, Ontario, nearly every one of whom had learned something from personal experience on how to gain freedom, Brown was a man of words trying to be a man of deeds, and they would not follow him. They understood him, as Thoreau and Emerson and Parker never did.” [19]

But to Southerners Brown was the symbol of an existential threat to their way of life. In the North there was a nearly religious wave of sympathy for Brown, and the “spectacle of devout Yankee women actually praying for John Brown, not as a sinner but as saint, of respectable thinkers like Thoreau and Emerson and Longfellow glorifying his martyrdom in Biblical language” [20] horrified Southerners, and drove pro-Union Southern moderates into the secession camp. The Richmond Enquirer wrote in its editorial, “The Harper’s Ferry invasion has advanced the cause of Disunion, more than any other event that has happened since the foundation of the Government; it has rallied to that standard men who formerly looked on it with horror; it has revived, with ten fold strength the desire of a Southern Confederacy…” [21]

The day that Brown went to his hanging he wrote his final missive. This was written once more in apocalyptic language, but also in which he portrayed himself as a Christ figure going to his cross on the behalf of a guilty people, but a people whom his blood would not atone:

“It’s now December second – the day of my hanging, the day the gallows become my cross. I’m approaching those gallows while sitting on my coffin in the bed of a military wagon. O dear God, my eyes see the glory in every step of the divine journey that brought me here, to stand on that platform, in that field, before all those soldiers of Virginia. Thank you, Father, for allowing an old man like me such might and soul satisfying rewards. I am ready to join thee now in Paradise…

They can put the halter around my neck, pull the hood over my head. Hanging me won’t save them from God’s wrath! I warned the entire country: I, John Brown, am now quite certain that the crimes of this guilty land will never be purged away, but with blood.” [22]

Brown’s composure and dignity during trial impressed Governor Henry Wise of Virginia who signed Brown’s death warrant as well as that of fire-eater Edmund Ruffin. In his diary Ruffin “praised Brown’s “animal courage” and “complete fearlessness & insensibility to danger and death.” [23]

UBrown’s death was marked with signs of mourning throughout the North, for Brown was now a martyr. Henry David Thoreau “pronounced Brown “a crucified hero,” [24] while through the North, Brown’s death was treated as a martyr’s death. Even abolitionists like William Lloyd Garrison who had condemned violence in the quest of emancipation praised Brown’s actions, while throughout the North:

Future Confederate General Lafayette McLaws spoke for many Southerners in the army when he wrote: His diary entry for February 27th 1860 noted:

“Debates in congress show no mitigation of sec. feeling…. I think it would be better not to be so fanatical on any subject, the extreme pro-slavery man is as bad as that type as that type of anti-slavery, John Brown. I do not consider slavery an evil by any means, but I certainly do not think it the greatest blessing.” [26]

But in the South there was a different understanding of Brown’s assault on Harper’s Ferry. Despite official denunciations of Brown by Abraham Lincoln and other Republican leaders, the message proclaimed by Southern newspapermen, ministers and politicians was that the North could not be trusted.  Brown’s raid, and the reaction of Northerners to it “was seized upon as argument-clinching proof that the North was only awaiting its opportunity to destroy the South by force….” [27]

Of course that was not the feeling in much of the North, but Brown’s actions and words were seized upon by the Southern versions of Brown to make Civil War inevitable once the political balance changed, and they neither controlled the Presidency, House, or Senate.

3 responses to “John Brown: Fanatical Idealist and “Warrior for God””