Silence Buys You Nothing: The Boogeymen Will Eventually Come After You Too

Last year on the I spoke on the last day of Passover at Norfolk’s Temple Israel on the topic of bearing witness to the Holocaust even as its last survivors pass away from their earthly journey. The late Christopher Hitchens wrote:

“Die Judenfrage,’ it used to be called, even by Jews. ‘The Jewish Question.’ I find I quite like this interrogative formulation, since the question—as Gertrude Stein once famously if terminally put it—may be more absorbing than the answer. Of course one is flirting with calamity in phrasing things this way, as I learned in school when the Irish question was discussed by some masters as the Irish ‘problem.’ Again, the word ‘solution’ can be as neutral as the words ‘question’ or ‘problem,’ but once one has defined a people or a nation as such, the search for a resolution can become a yearning for the conclusive. Endlösung: the final solution.”

President Trump repeatedly dehumanizes and threatens minority groups, immigrants, both legal and undocumented, LGBTQ people, religious minorities (including liberal Jewish) women, the disabled, and even professional military officers. The same with the leaders and members of the opposition Democratic Party, as well as the few former or current Republicans bold enough to oppose him. Right wing pundits, politicians, and preachers often do the same, and the bulk of the Republican Party, mostly made up of White Evangelical Christians say nothing or even echo his comments. Most of these people do not readily admit their prejudice, though some, including members of Congress openly support White Nationalist policies and groups.

Little or no condemnation is ever made by them against killings and mass murder, let us call it Domestic Terrorism. In return such groups are growing and being emboldened and the President and his compatriots spin lies as history. A couple of nights ago I wrote about a nationally known Jewish friend of mine being threatened by an alleged Christian, making very Anti-Semitic comments and using the language of the Nazis to describe him and other Jews, who do not

How does one prevent yet another genocide from happening? I don’t know, but I think that there is some wisdom in the answer a German University Colleague of Milton Mayer said when Mayer was questioning him about the subject.

In his book They Thought they Were Free Mayer wrote of his conversation with that professor:

“How is this to be avoided, among ordinary men, even highly educated ordinary men? Frankly, I do not know. I do not see, even now. Many, many times since it all happened I have pondered that pair of great maxims, Principiis obsta and Finem respice—‘Resist the beginnings’ and ‘Consider the end.’ But one must foresee the end in order to resist, or even see, the beginnings. One must foresee the end clearly and certainly and how is this to be done, by ordinary men or even by extraordinary men? Things might have. And everyone counts on that might.

“Your ‘little men,’ your Nazi friends, were not against National Socialism in principle. Men like me, who were, are the greater offenders, not because we knew better (that would be too much to say) but because we sensed better. Pastor Niemöller spoke for the thousands and thousands of men like me when he spoke (too modestly of himself) and said that, when the Nazis attacked the Communists, he was a little uneasy, but, after all, he was not a Communist, and so he did nothing; and then they attacked the Socialists, and he was a little uneasier, but, still, he was not a Socialist, and he did nothing; and then the schools, the press, the Jews, and so on, and he was always uneasier, but still he did nothing. And then they attacked the Church, and he was a Churchman, and he did something—but then it was too late.”

Like Mayer’s friend, must people are content to play it safe and hope that the boogeyman won’t come after them. But history shows that such thinking is a pipe dream. Trump’s Republican and Christian supporters need to realize that one day, they they will become the victims of his version of the Night of the Long Knives. Every authoritarian eventually goes after his supporters who are neither completely on board or have become inconvenient or unprofitable. Ask Hitler, Stalin, Mao, or any of the authoritarians of the past four millennia. Study history for lessons in the present to prevent it’s reputation in the future. 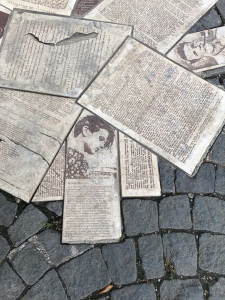 “The real damage is done by those millions who want to ‘survive.’ The honest men who just want to be left in peace. Those who don’t want their little lives disturbed by anything bigger than themselves. Those with no sides and no causes. Those who won’t take measure of their own strength, for fear of antagonizing their own weakness. Those who don’t like to make waves—or enemies. Those for whom freedom, honour, truth, and principles are only literature. Those who live small, mate small, die small. It’s the reductionist approach to life: if you keep it small, you’ll keep it under control. If you don’t make any noise, the bogeyman won’t find you. But it’s all an illusion, because they die too, those people who roll up their spirits into tiny little balls so as to be safe. Safe?! From what? Life is always on the edge of death; narrow streets lead to the same place as wide avenues, and a little candle burns itself out just like a flaming torch does. I choose my own way to burn.”

So, two days before the 75th anniversary of the liberation of Auschwitz, I leave you with this, resist the beginning, remember the end, because in spite of your silence the bogeyman will eventually come after you too.

4 responses to “Silence Buys You Nothing: The Boogeymen Will Eventually Come After You Too”