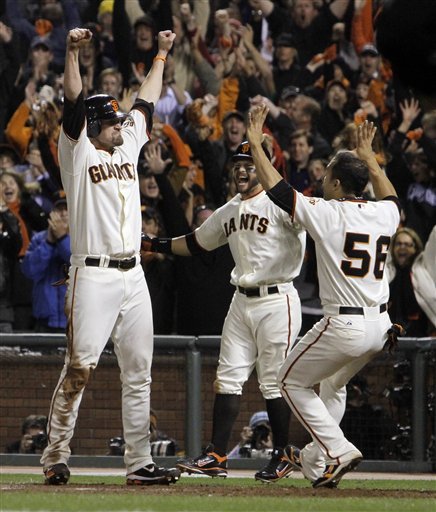 The San Francisco Giants keep finding ways to win and of befuddling the experts in their NLCS matchup with the Philadelphia Phillies.  With most experts picking the Phillies to win this series in five or six games no matter what happens it will go seven.  Tonight in front of a wild crowd of Giants fans decked out in orange and black, wearing “fear the beard” beards, panda heads and any number of unusual outfits the Giants defeated the Phillies 6-5 beating Roy Oswalt in the bottom of the 9th to do it.

The Giants got the first run on the board in the bottom of the 1st inning when Freddy Sanchez singled and then advanced to second and then third on wild pitches by Phillies starter Joe Blanton. With Sanchez on third base Buster Posey singled to get his first RBI of the night.  The Giants added to their lead in the bottom of the 3rd inning when with 2 outs Aubrey Huff singled and scored on a deep double by Buster Posey. 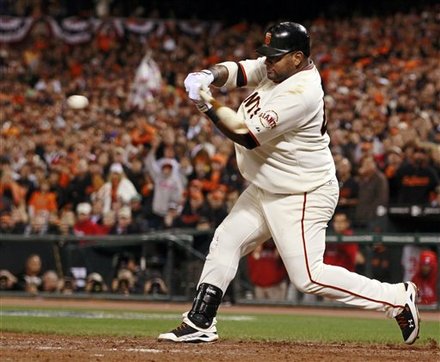 Madison Bumgarner was solid through four innings striking out 6 Phillies batters and only giving up 2 hits but lost his edge in the 5th inning.  The rookie gave up 4 singles one of which by Shane Victorino scored Ben Francisco to put the Phillies on the board but a tremendous throw from center fielder Aaron Rowland cut down Carlos Ruiz at the plate with Posey making a great play to block the plate and hold onto the ball in the collision with Ruiz.  This turned out to be a big play which kept the Phillies from a second run on the play and giving the Giants a badly needed out.  Chase Utley singled to put runners at first and second and brought Manager Bruce Bochy to the mound to lift Bumgarner in favor of Santiago Casilla. Casilla then gave up a double to Placido Polanco which scored both Victorino and Utley.  Casilla then intentionally walked Ryan Howard and hit Jayson Werth with a pitch to load the bases. Casilla then tossed a wild pitch which scored Polanco to give the Phillies a 4-2 lead.

Andres Torres walked to lead off the Giants half of the 5th inning and advanced to 2nd base on a ground out by Edgar Renteria. He then scored when Aubrey Huff singled to end the 5th inning with the score the Phillies 4 and the Giants 3. Casilla retired the Phillies in order in the 6th and in the bottom half of the inning the Giants went back to work.  Pat Burrell led off with a walk and was followed by Phillies killer Cody Ross who smacked an inside fastball into the left field corner to put runners on second and third. This brought Pablo the “Panda” Sandoval to the plate. Sandoval who had been benched at the beginning of the series has been in a slump but in this at bat he took a Chad Durbin pitch to deep center for a double which scored both Burrell and Ross and give the Giants a 5-4 lead going into the 7th inning.

Javier Lopez came in and put the Phillies down in order in the 7th and the Giants loaded the bases in the bottom of the 7th with one out but Sandoval hit into an inning ending double play.  In the top of the 8th inning Lopez gave up a double to Ryan Howard to lead off the inning and was pulled in favor of Sergio Romo one of the Giants’ “black beards.” Romo gave up a double to Jayson Werth to tie the game before retiring Jimmy Rollins on a pop up and Ben Francisco and Carlos Ruiz on consecutive strike outs using just six pitches to do it.

Fear the Beard: Brian Wilson shuts down the Phillies to collect the win  (Photo by Harry How/Getty Images)

With the score tied in the 9th inning the Giants brought closer Brian Wilson into the game. Wilson who has 4 saves in 6 playoff appearances got pinch hitter Ross Gload on a ground out to shortstop Juan Uribe who made an outstanding effort to get the out. He then struck out Shane Victorino and put Chase Utley out on a line drive to left field.  The tension mounted as the Phillies had closer Brad Lidge and starter Roy Oswalt warming up in the bullpen. As the Phillies half of the 9th ended it was Oswalt who got the call going on 2 days rest following his start in game two against the Giants.  Freddy Sanchez lined out to right for the first out which brought Aubrey Huff to the plate. Huff singled and then advanced to 3rd base on a single by Buster Posey which could have scored Huff had Jayson Werth not made a tremendous defensive play to keep the ball from going to the wall. This brought an unlikely hero to the plate. Juan Uribe playing with an injured hand was able to hit a medium depth fly ball to left which scored Huff from third to give the Giants a 6-5 win and a 3-1 lead in the NLCS.

The Giants made a great team effort to win this game, the first game since September where they scored more than 4 runs.  Timely hitting by Buster Posey who went 4-5 with 2 RBIs, Pablo Sandoval with his 2 RBI double and Aubrey Huff who went 3-5 with an RBI helped push the Giants over the top in this see-saw game.  Brian Wilson got the win in relief and Roy Oswalt the loss in a rare relief appearance.  The teams meet for game five on Thursday with a battle of the aces on the offing as Roy “Doc” Hallady goes up against Tim Lincecum in what could be the deciding game of the series.  Giants fans accustomed to “Tortureball” need to break out their Xanax for this one which could be an epic playoff game with two of the best pitchers in baseball going against each other in a game that could send Halladay and the Phillies home until the spring.