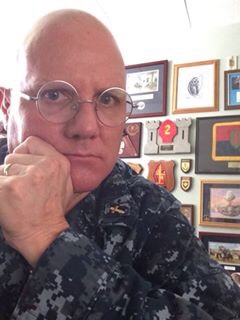 Last night I wrote about Attorney General Jeff Sessions and his newly formed Religious Tyranny Task Force. The goal of that task force is to make sure that white conservative Christians can impose their beliefs on other and suffer no recriminations from discriminating against Gays and others that they do not want to serve or care for, even if their religious rights trump the civil rights of others. It is perhaps one of the most incestuous and dangerous displays of marriage of the Church and the police power of the state in the history of the United States.

Likewise, last month I wrote an article about having been accused by a chapel congregation member of conduct unbecoming an officer and contempt towards the President of the United States. I wrote the article after I was cleared of the charges during the preliminary inquiry. But it left me with many questions about the people of my congregation; questions that I have been wrestling for the better part of the month.

Since I am the senior supervisory chaplain on my base and come from a tiny denomination of the Old Catholic tradition that is stuck in the middle between Roman Catholicism and Protestantism I am an odd fit. My denomination is orthodox in its theology of God and Christ but very much a part of the the understandings of the Protestant Social Gospel of the early 1900s, the social teachings that came out of the Roman Catholic Church during Vatican II, and the Civil Rights Movement. I am also informed by being a trained historian.  This includes having a strong understanding of influence of the early Baptists in the United States on religious liberty as it came to be written into the Bill of Rights. The Baptists of that period were highly persecuted, in Europe and in the North American colonies by state churches. As a result they were much more progressive and tolerant of the rights of all religious minorities and even non-believers.

These men included Roger Williams who founded the colony of Rhode Island as a colony with no state religion and Virginia Baptist John Leland who was the inspiration for James Madison drafting the Bill of Rights.

I do my best to support the congregation and my junior chaplains regardless of their theological beliefs or political viewpoints. As such I try to allow my junior chaplains the chance to do good by pastoring the congregation while I support by them substituting every four to six weeks so they can get a full weekend off once in a while. In fact my policy is that I will not police their sermon content or how they do ministry so long as they care about the people, are not abusive, do not violate the rights of others, or commit crimes. So if a congregation member were to complain to me about their sermon I would tell that congregant to talk to them and if they could not work it out to contact that chaplains church or religious organization. I cannot police the beliefs

Since the accusations were leveled and I was told that I was exonerated I have been thinking of how next to approach the congregation, and today I got a copy of the investigation. I was heartened by some of the statements given by members of the congregation, while others troubled me. In the investigation was a copy of the letter the complainant sent to my commander. The difference between his letter and even the even the most prejudiced other congregant was amazing for even those somewhat critical of the sermon admitted their prejudices and gave me some benefit of doubt. In fact his letter was over the top and in opposition to what everyone of the others said that the investigating officer decided not to get a statement from him. But I could never believe that someone could make up such venomous lies in an attempt to destroy my name, reputation and career in such a despicable manner.

My review of the investigation and the statements has made me even more concerned about going before the congregation again. Knowing the attitudes of many it feels like by doing so I will be exposing myself to other charges from people who are little different than the Gestapo, Stasi, and KGB informants who routinely denounced priests and pastors. Sadly, with the Justice Department now behind them such people will have free reign to denounce people simply based on their often quite shallow and narrow theological understandings which are far more informed by their right wing politics than by Scripture, Tradition, or Reason.

So in the next few weeks I have a decision to make on how I will deal with this. I have a few ideas and I discuss them with my Protestant pastors who are much more conservative than me are incredibly supportive. I also am thinking and praying about what to do. Whatever I do I will script my remarks and have at least one of my other chaplains in attendance. I may even record it because I don’t want to give any of these Trump cultists to make up anything that cannot be refuted.

The sad thing is that I even have to be concerned about this. I never in a million years could have imagined being denounced by retired military officer for my sermon content. That gives me pause and frankly makes me very concerned. The experience has embittered me.  Don’t get me wrong. There are a few people in the congregation who have stood behind me and encouraged me, but most have either turned their backs on me or remained bystanders.

So I ask for your prayers, thoughts, encouragement, or wisdom in what I should do next. I am struggling with anger while trying to love and forgive the people who hurt me that God still loves and who Christ died to save.

However, there is one thing that I do know. It is something that both Dr. Martin Luther King Jr. and Dietrich Bonhoeffer understood. Dr. King said: “Our lives begin to end the day we become silent about things that matter.”  While Bonhoeffer wrote: “Silence in the face of evil is itself evil: God will not hold us guiltless. Not to speak is to speak. Not to act is to act.”

So I know I cannot remain silent because what is happening in the church in the United States not to mention the country is a manifestation of evil.

21 responses to “Dealing With “Christian” Political Extremists: My Recent Experience”