God’s Not Quite Chosen People: Confederate Christianity and the “Christian” Trump Cult 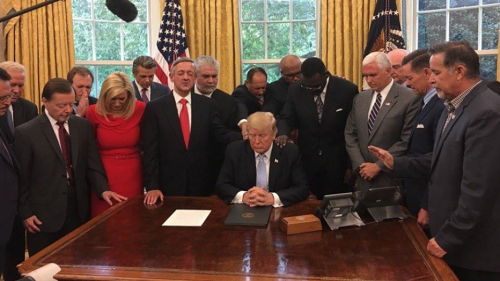 Unlike many areas of study, history never goes out of date. While I do not think that history necessarily repeats itself, I do believe that essentially humans never real change. Yes we sometimes do get better, but we often instead of rising to our best, we repeat the errors of those who have gone before us.

Today I read about President Trump’s closed door meeting with about 100 Trump supporting Evangelical Christian leaders at the White House. As he usually does the President laced his comments with outright lies about laws and legislation that he has supposedly enacted which his cult like supporters fawned over him. It was yet another display of how far those who with one breath claim the name of Christ in the next take Judas’s 30 pieces of silver in order to gain temporal power. But I digress…

But this tendency to do their worst is especially true in he arenas of politics and religion, especially when societies decide to merge the two.

I have written about this good number of times citing contemporary and historical examples, but today I am pulling out yet another section of the chapter of my Civil War and Gettysburg Staff Ride text dealing with how the Southern Confederacy for all practical purposes merged church and state during the Civil War. Now it did not become a full fledged theocracy, but I have no doubt that it would have had the Confederacy succeeded in its quest to become independent. The philosophical and religious thought that undergirded so much of what the Confederacy stood for almost demanded this.

And so today when we look at the fracturing of religion along political and ideological lines political resurgence of the Christian Right in the Republican Party we see many of the themes of the Confederacy being recast and broadcast as what it is to be authentically American and even more dangerously, that only Christians can be real Americans. That it what almost all the current field of Republican candidates cow-tow to the most extreme leaders and spokesmen of the Christian Right, some of whom are openly neo-Confederate in their beliefs and have ties to neo-Confederate and White Supremacist organizations.

Since those supposedly Christian leaders seek to use their influence to force their religion on others, this subject remains very important.

Perhaps more than anything, the denominational splits helped prepare the Southern people as well as clergy for secession and war. They set precedent by which Southerners left established national organizations. When secession came, “the majority of young Protestant preachers were already primed by their respective church traditions to regard the possibilities of political separation from the United States without undue anxiety.”[1]

One of the most powerful ideological tools since the days of the ancients has been the linkage of religion to the state. While religion has always been a driving force in American life since the days of the Puritans in the Massachusetts Bay Colony, especially in the belief about the destiny of the nation as God’s “Chosen People,” it was in the South where the old Puritan beliefs took firm root in culture, society, politics and the ideology which justified slavery and became indelibly linked to Southern nationalism. “Confederate independence, explained a Methodist tract quoting Puritan John Winthrop, was intended to enable the South, “like a city set on a hill’ [to] fulfill her God given mission to exalt in civilization and Christianity the nations of the earth.” [2]

Religion and the churches “supplied the overarching framework for southern nationalism. As Confederates cast themselves as God’s chosen people.” [3] the defense of slavery was a major part of their mission. A group of 154 clergymen calling themselves “The Clergy of the South” “warned the world’s Christians that the North was perpetuating a plot of “interference with the plans of Divine Providence.” [4] A Tennessee pastor bluntly stated in 1861 that “In all contests between nations God espouses the cause of the Righteous and makes it his own….The institution of slavery according to the Bible is right. Therefore in the contest between the North and the South, He will espouse the cause of the South and make it his own.” [5]

The effect of such discourse on leaders as well as individuals was to unify the struggle as something that linked the nation to God, and God’s purposes to the nation identifying both as being the instruments of God’s Will and Divine Providence:

“Sacred and secular history, like religion and politics, had become all but indistinguishable… The analogy between the Confederacy and the chosen Hebrew nation was invoked so often as to be transformed into a figure of everyday speech. Like the United States before it, the Confederacy became a redeemer nation, the new Israel.” [6]

This theology also motivated men like the convinced hard line Calvinist-Presbyterian, General Stonewall Jackson on the battlefield. Jackson’s brutal, Old Testament understanding of the war caused him to murmur: “No quarter to the violators of our homes and firesides,” and when someone deplored the necessity of destroying so many brave men, he exclaimed: “No, shoot them all, I do not wish them to be brave.” [7]

In effect: “Slavery became in secular and religious discourse, the central component of the mission God had designed for the South….The Confederates were fighting a just war not only because they were, in the traditional framework of just war theory, defending themselves against invasion, they were struggling to carry out God’s designs for a heathen race.” [8]

From “the beginning of the war southern churches of all sorts with few exceptions promoted the cause militant” [9] and supported war efforts. The early military victories of Robert E. Lee’s Army of Northern Virginia and the victories of Stonewall Jackson in the Shenandoah Valley   were celebrated as “providential validations of the cause that could not fail…” Texas Methodist minister William Seat wrote: “Never surely since the Wars of God’s ancient people has there been such a remarkable and uniform success against tremendous odds. The explanation is found in the fact that the Lord goes forth to fight against the coercion by foes of his particular people. Thus it has been and thus it will be to the end of the War.” [10]

This brought about a intertwining of church and state authority, a veritable understanding of theocracy as “The need for the southern people to acknowledge God’s authority was bound up with a legitimation of the authority of clerical and civil rulers. Christian humility became identified with social and political deference to both God and Jefferson Davis.” [11]

Jefferson Davis and other leaders helped bolster this belief:

“In his repeated calls for God’s aid and in his declaration of national days of fasting, humiliation, and prayer on nine occasions throughout the war, Jefferson Davis similarly acknowledged the need for a larger scope of legitimization. Nationhood had to be tied to higher ends. The South, it seemed, could not just be politically independent; it wanted to believe it was divinely chosen.” [12]

Davis’s actions likewise bolstered his support and the support for the war among the clergy. A clergyman urged his congregation that the people of the South needed to relearn “the virtue of reverence- and the lesson of respecting, obeying, and honoring authority, for authority’s sake.” [13]

Confederate clergymen not only were spokesmen and supporters of slavery, secession and independence, but many also shed their clerical robes and put on Confederate Gray as soldiers, officers and even generals fighting for the Confederacy. Bishop Leonidas Polk, the Episcopal Bishop of Louisiana, who had been a classmate of Jefferson Davis at West Point was commissioned as a Major General and appointed to command the troops in the Mississippi Valley. Polk did not resign his ecclesiastical office, and “Northerners expressed horror at such sacrilege, but Southerners were delighted with this transfer from the Army of the Lord.” [14] Lee’s chief of Artillery Brigadier General Nelson Pendleton was also an academy graduate and an Episcopal Priest. By its donations of “everything from pew cushions to brass bells, Southern churches gave direct material aid to the cause. Among all the institutions in Southern life, perhaps the church most faithfully served the Confederate Army and nation.” [15] Southern ministers “not only proclaimed the glory of their role in creating the war but also but also went off to battle with the military in an attempt to add to their glory.” [16]

Sadly, the denominational rifts persisted until well into the twentieth century. The Presbyterians and Methodists both eventually reunited but the Baptists did not, and eventually “regional isolation, war bitterness, and differing emphasis in theology created chasms by the end of the century which leaders of an earlier generation could not have contemplated.” [17] The Southern Baptist Convention is now the largest Protestant denomination in the United States and many of its preachers are active in often divisive conservative social and political causes. The denomination that it split from, the American Baptist Convention, though much smaller remains a diverse collection of conservative and progressive local churches. Some of these are still in the forefront of the modern civil rights movement, including voting rights, women’s rights and LGBT issues, all of which find some degree of opposition in the Southern Baptist Convention.

But the religious dimensions were far bigger than denominational disagreements about slavery; religion became one of the bedrocks of Confederate nationalism. The Great Seal of the Confederacy had as its motto the Latin words Deo Vindice which can be translated “With God as our Champion” or “Under God [Our] Vindicator.” The issue was bigger than independence itself; it was intensely theological. Secession “became an act of purification, a separation from the pollutions of decaying northern society, that “monstrous mass of moral disease,” as the Mobile Evening News so vividly described it.” [18]

The arguments found their way into the textbooks used in schools throughout the Confederacy. “The First Reader, For Southern Schools assured its young pupils that “God wills that some men should be slaves, and some masters.” For older children, Mrs. Miranda Moore’s best-selling Geographic Reader included a detailed proslavery history of the United States that explained how northerners had gone “mad” on the subject of abolitionism.” [19] The seeds of future ideological battles were being planted in the hearts of white southern children by radically religious ideologues, just as they are today in the Madrassas of the Middle East.

While the various theological and ideological debates played out and fueled the fires of passion that brought about the war, they also provided great motivation to their advocates. This was true especially to Confederates during the war, that their cause was righteous. While this fueled the passion of the true believers, other very real world decisions and events in terms of politics, law and lawlessness, further inflamed passions.

[7] Fuller, J.F.C. Grant and Lee: A Study in Personality and Generalship, Indiana University Press, Bloomington IN 1957

[8] Ibid. Faust, The Creation of Confederate Nationalism: Ideology and Identity in the Civil War South p.60

3 responses to “God’s Not Quite Chosen People: Confederate Christianity and the “Christian” Trump Cult”