The words on the polished stone in the hall of remembrance at the U.S. Holocaust Museum are as much as a somber warning as a command:

Only Guard Yourself and Guard Your Soul Carefully, Lest You Forget the Things Your Eyes Saw, Lest These Things Depart Your Heart All the Days Of Your Life, and You Shall Make Them Known to Your Children and to Your Children’s Children.

Last May I visited the United States Holocaust Museum. Since I study the Weimar and Nazi period, the Holocaust and the war crimes trials this was important. While in Germany I have been to the Dachau, Buchenwald, Flossenburg, and Bergen-Belsen Concentration Camps, the T4 Euthanasia Program Center at Hadamar, the Palace Of Justice in Nuremberg where the Nuremberg War Crimes Trials (as well as the Nazi era Nuremberg laws) were prosecuted, the Wannsee House where the Final Solution was implemented, the Memorials to the German Resistance in Berlin, the Sophie Scholl White Rose Museum, and the Munich Documentation Center for the History of National Socialism; this visit, in the United States was important. I will be continuing to visit Holocaust sites in Germany when I go there this Fall, but last year I finally was able to stake out the time to visit the U.S. Holocaust Museum.

The museum is important and despite having been to places shown in it and knowing more about the Nazi regime and the Holocaust than the vast majority of Americans, I found myself overwhelmed at times as I walked slowly through the exhibits. Many I recognized, knew about, or had been to, but that did not make them any less emotionally difficult to see. But there were others that drove home why this museum is so important in our day and time.

I think that the one that hit me the hardest was the pictorial Tower of Faces from the Polish shtetl of Ejszyszki. That town was home to some 4,000 Jews and the pictures had been taken over the preceding decade by local photographers. They were pictures of everyday family and community life; men, women, children at work, at play, at rest. Worshipping, working, studying, the old and the young, the well off and the poor, the religious and those not as religious at all phase of life captured in photos for eternity. For 3500 of them their lives ended on September 21st 1941 when the Nazis rounded up the Jews at their Synagogues on the eve of Yom Kippur and executed them by firing squad in mass graves at the town’s Christian and Jewish cemeteries. Only 29 of those who survived that day lived through the war. That Jewish community had existed for 900 years and was exterminated in a matter of hours.

I looked at those pictures and I could not get over all of those innocent lives cut short. Each face was the picture of an individual or individuals, families, friends, schoolmates. They were not abstract numbers or statistics but real flesh and blood people like you and me. They had hopes and dreams, but because they were Jews they were exterminated, like nearly six million other Jews who also were real people with hopes and dreams that would be destroyed by the Nazi racial war. Of course the Nazis targeted others, but none with the relentless anti-Semitic racial hatred propagated by Nazi ideology. Thus they condoned and executed by people who would have ordinarily have been considered upstanding and moral citizens. The late Christopher Hitchens wrote:

“We should not at all allow ourselves to forget the millions of non-Jewish citizens of Belarus, Russia, Ukraine, and other Slav territories who were also massacred. But for me the salient fact remains that anti-Semitism was the regnant, essential, organizing principle of all the other National Socialist race theories. It is thus not to be thought of as just one prejudice among many.”

But then this is not abnormal as the great American theologian and philosopher Reinhold Niebuhr wrote: “Ultimately evil is done not so much by evil people, but by good people who do not know themselves and who do not probe deeply.”

The problem is that what happened during the Holocaust and to the people of the shtetl of Ejszyszki is not just an aberration, it is all too much a part of human nature; even that of people who call themselves Christians like those who exterminated the Jewish people of Ejszyszki. It is not simply an artifact of history that we can ignore. It can happen again and if we are not careful it will happen again. The spirit of the ideology that allowed normal law abiding people to massacre millions of people, either up close and personal like at Ejszyszki or in death factories like Soribor, Treblinka, Belzec, and Auschwitz is still alive today in Russia, Europe, and even in the United States. Of course it exists elsewhere in Asia, Africa, and the Middle East. But I think that it is most frightening when it exists in the nations which claim to be inheritors of Christian civilization or the enlightenment, especially among the people who claim the words of the Declaration of Independence that “all men are created equal, that they are endowed by their Creator with certain unalienable Rights, that among these are Life, Liberty and the Pursuit of Happiness.”

Honesty when I see the President of the United States and his most devoted followers follow the script of the Nazis and other race supremacists I get concerned and I remember the words of historian Yehuda Bauer:

As for people who might be neighbors, coworkers or even friends today who for whatever reason either support, dismiss, or ignore the peril of the racial, ideological, and religious animus of the modern authoritarians and anti-Semites I can only recall the words of Yale historian Dr. Timothy Snyder who wrote:

Today, more than at any time in his Presidency, I truly believe that under President Trump that the United States is just a Reichstag Fire moment the usurpation Of the Constitution and the beginning of a dictatorship. I believe that, the Muller Investigation and the Democratic Party House Majority notwithstanding, we entering a phase of history when not only Trump supporters, but even some Trump opponents would do nothing in a crisis and either become willing participants in tyranny, bystanders to it or victims of it. As I walked through the museum and remembered all of my visits to Holocaust and other sites in Germany I realized again that it can happen again. 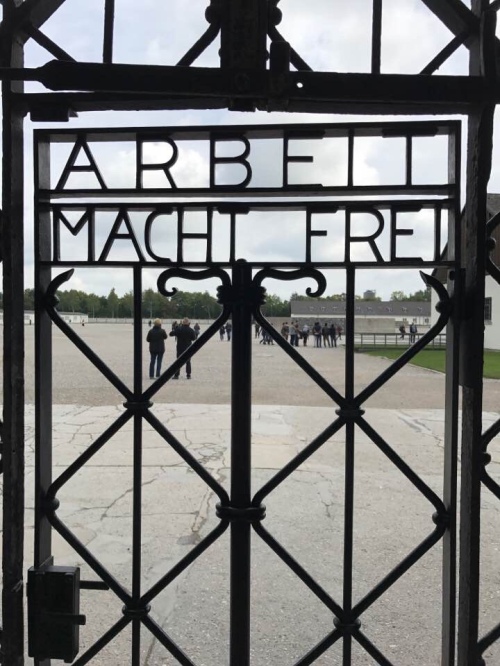 When I finished with most of my visit I went to the Hall of Remembrance and sat for a long time in silence, a silence facing the words on that stone, and that made me realize again just how easy it would be to happen again, and the choices that all of us must make if it is not to happen again in our time.

I’ll leave you with the warning of Yehuda Bauer:

I cannot be a bystander. This Saturday I will be speaking on the topic of bearing witness to the Holocaust as the last witnesses pass away and the Holocaust denial industry ramps up and gains supporters in the high reaches of governments around the world. It is entitled, Lest We Forget: Walk, Remember, and Bear Witness at Temple Israel in Norfolk. The premise is that In order to bear witness today the those who want to prevent genocide today need to study it, and then go to the places hallowed by the blood of the victims in order to internalize it and speak for those whose voices cry out from the grave, “never again!”

2 responses to “Bearing Witness: My Mission”